The TEPJ concluded that the topics discussed in the spot are of national interest
By The News · 22 of March 2016 09:18:32
AGUSTÍN BASAVE BENÍTEZ, NUEVO PRESIDENTE DEL PRD, NOTIMEX/FOTO/ESPECIAL/POL, No available

The Specialized Regional Chamber of the Federal Electoral Tribunal (TEPJF) determined that the broadcasting of a television spot by Agustín Basave Benítez, national leader of the Democratic Revolution Party (PRD), which was seen in nine states which will hold elections on June 5, did not constitute “anticipated acts of campaign”, nor it was misuse of the law for personal purposes. 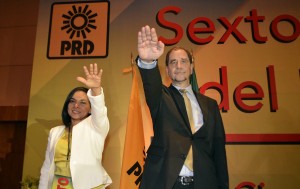 The judges of the TEPJF noted that the broadcasting consisted of expressions protected by freedom of speech, where PRD ideology and constitutional documents of the party were discussed.

The complaint was originally filed on March 21 by Edmundo Said Chevalier Alcázar, who accused the PRD and Basave Benítez of alleged acts of anticipated campaign and the misuse of the law with purposes of personal promotion.

The TEPJ concluded that the topics discussed in the spot are of national interest and that they reflect the party’s ideology. These topics included, among others, poverty, corruption, national security, social welfare, and legal and social cohesion.

The judges of the TEPJF concluded that Basave’s spot did not incur in anticipated campaign acts. Photo: Notimex.

The judged said that, although Basave Benítez’s image is visible in the spot, there are no allusions of any kind to the coming elections.

A Brief History of the Evolution of Undergarments

What You’re Doing This Weekend in Mexico City