BEIRUT – A fresh wave of airstrikes in eastern Syria killed at least 35 civilians including women and children, state media and a monitoring group reported Friday, as the U.N. human rights chief said civilians are increasingly paying the price of escalating attacks against the Islamic State group (I.S.) in the country.

Zeid Ra’ad al-Hussein’s comments came hours after airstrikes on the I.S.-held eastern Syrian town of Mayadeen, where airstrikes Thursday night killed dozens, many of them family members of I.S. fighters. The Britain-based Syrian Observatory for Human Rights (SOHR) said the airstrikes were conducted by the U.S.-led coalition fighting I.S. It added that the airstrikes began around sunset Thursday as people were heading to mosques for evening prayers and continued until the early hours of Friday.

“The same civilians who are suffering indiscriminate shelling and summary executions by ISIL, are also falling victim to the escalating airstrikes, particularly in the northeastern governorates of” Raqqa and Deir el-Zour, al-Hussein said in a statement from Geneva, using another acronym for IS. “Unfortunately, scant attention is being paid by the outside world to the appalling predicament of the civilians trapped in these areas.” 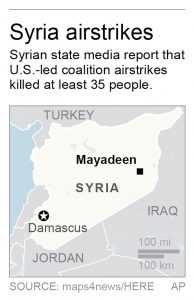 The airstrikes came as the U.S. military said it killed three I.S. fighters in attacks in Syria and Iraq over the past month.

The Observatory later said a total of 106 people have been killed in Mayadeen since Thursday evening, including I.S. fighters and 42 children.

The monitoring group said among the 106 were 80 people who perished when a four-story building housing families of I.S. fighters from Syria and north Africa was destroyed in an airstrike. More than 20, including 10 I.S. fighters, were killed in other airstrikes that hit the municipality building among other places.

Syria’s state news agency SANA also said 35 civilians, most of them women and children, were killed in the airstrikes, also blaming the coalition.

There was no immediate comment from the coalition. It is not unusual to have conflicting casualty figures in the immediate aftermath of airstrikes in Syria.

Reports of deaths among civilians have been on the rise as the fighting against I.S. intensifies in northern and eastern Syria.

Omar Abu Laila, a Europe-based opposition activist who is originally from eastern Syria, said Mayadeen residents were urged through mosque loudspeakers to head to hospitals and clinics to donate blood. He also said that more airstrikes occurred in the early hours Friday. He added that about a dozen people were killed and that he is still waiting for casualty figures to emerge following the destruction of the building housing families of I.S. fighters.

Al-Hussein, the U.N. human rights chief, in a dramatic appeal on Friday urged all parties conducting strikes against the Islamic State group in Syria to take greater care differentiating between military and civilian targets.

He cited a May 14 strike that reportedly killed 23 farm workers in a rural area of Raqqa province and an airstrike the following day that is said to have killed at least 59 civilians and wounded dozens in the I.S.-controlled eastern town of Boukamal that is also in in Deir el-Zour province.

Al-Hussein, who is a member of the Jordanian royal family, said the rising toll of civilian casualties suggests “insufficient precautions” are being taken in the attacks.

Al-Hussein said he was concerned about retaliatory measures taken by I.S. against civilians suspected of facilitating the airstrikes and reports that civilians were being prevented from leaving I.S.-controlled areas. The day after the incident at Boukamal, I.S. fighters reportedly slit the throats of eight men at the site of the attack, accusing them of providing coordinates for the air strikes.

The U.S. Central Command meanwhile released a statement describing the three IS members killed by the U.S.-led coalition over the past month as “senior ISIS military officials and planners,” using another acronym for I.S.

In a statement, it said one was a Syria-based “facilitator” from Turkey, who was killed in an airstrike in Syria on April 27. He was described as an I.S. recruiter in the central Turkish city of Konya.

Another was described as a French-Algerian I.S. fighter based in Syria. He was killed by an airstrike in Syria on May 11.

More than 100 people, including 42 children, killed in airstrikes on an ISIS-held town in eastern Syria, reports say https://t.co/UzjeNNGffL pic.twitter.com/Ol3aHRIWtD

The third was killed near the Iraqi city of al-Qaim on May 18. Central Command said he was an I.S. military official who operated in Iraq’s Anbar province

The U.S.-led coalition also announced on Friday that a U.S. service member has died in northern Syria. A statement said the serviceman died of injuries sustained “during a vehicle roll-over.” It was not immediately clear whether the incident was related to a combat situation. No further details were made available.

The U.S. has hundreds of troops and advisers in Syria in various roles, assisting local allies in the fight against the Islamic State group.

Last year, a U.S. service member died from wounds sustained in an improvised explosive device blast in the vicinity of Ayn Issa in northern Syria while another soldier died from suspected natural causes in March of this year.