Ricardo Limassol presented his third book of poetry at Casa del Poeta Ramón López Velarde in the Roma neighborhood
By The News · 02 of February 2017 11:31:16
On the cover, a miniature dolphin that once was a speck of blood, gives a warm and cunning welcome to the devastating pop and salty words inside, No available, photo: Facebook/Ricardo Limassol

MEXICO CITY – On Tuesday, Ricardo Limassol presented his third poetry book provocatively titled “Ganar es de Perdedores” (Winning is for Losers) at Casa del Poeta in the Roma neighborhood, before an audience of his closest and dearest.

The author began by sharing the underlying idea that brought forth the book, a feeling experienced during his childhood, when at a family gathering, he noticed something in the sky and immediately felt compelled to share it, but refrained thinking perhaps he was the only one to see it. Now, at 29, no longer afraid of being the only one who perceives a nuance or a presence, his writing unapologetically points and makes you stare at it. 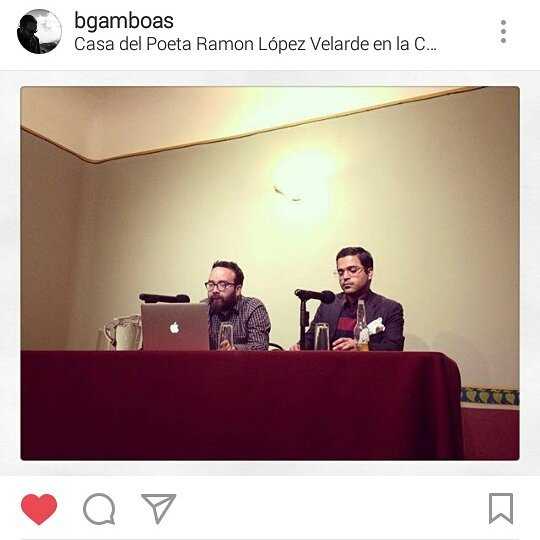 The tiny edition of “Ganar es de Perdedores” maintains the same brutal and terrifying sincerity as his previous books — “Jóvenes Sin Futuro Les Habla Su Capitán” (Youngsters Without a Future This is Your Captain Speaking) and “Todo Menos Trabajar” (Everything But Work) — achieved by a decision to be honest with himself before anybody else. He is the first to admit that he’d jump ship before it sank, not the ideal modus operandi for a sea captain, but to him risking his own life in the name of honor means nothing, hence the biting humor that peppers the entire trilogy.

Fan of Frank O’Hara and former copywriter, Limassol juggled with the power of persuasion and bluntness to deliver poems in two lines — part haiku, part maxim — a showcase of his own arrogance. The final part of the trilogy was conceived before the second book, although much had to be refined in order for it to come out. As editor of fanzine “Días Fantasma” Bernardo Gamboa, who presented the poet before the audience, put it: “Ricardo takes a shot at himself and breaks into pieces, picks up the part he likes the most, falls in love with it, only to polish it until there is almost nothing left.”

Pop references are ubiquitous in Limassol’s poetry, as well as salty remarks on everybody, starting by himself. Photo: loopjamaica.com

On the cover, a miniature dolphin that once was a speck of blood gives a warm and cunning welcome to the devastating pop and salty words inside. Published by Tijuana-based Editorial Ojo de Pez and carefully packaged in peach-colored paper, the book conveys the feeling of yearning, something which destroys but can’t be done without. The sea wrecks the ship, forces you to a strand, yet you realize life is nothing but emptiness without it. Sentimentality aside, every poem brims with the need to be read out loud, to be shared.