On its opening night on Sunday, the Opera “Turandot” at Bellas Artes proved to be an all around success.

One of the most famous works of Italian composer Giacomo Puccini came to life on yet another stage, further proof that good work is timeless and ever provocative.

“Turandot” was Puccini’s final and unfinished masterpiece, and one where he confessed to have placed all of his soul. A love story set in ancient China, the story resonates with audiences still today, because of the incredible emotion that it irradiates.

Tenor Carlos Galván as Calaf while performing in the opera “Turandot” at the Bellas Artes theater in Mexico City, Mexico, May 28, 2017. Photo: Courtesy of the National Fine Arts Institute

There is one voice that shines above all others, and that is the voice of soprano María Katzarava who plays the character of Liù. Katzarava proves why she has become an international success, by encapsulating and transmitting the entire essence her character through her voice.

It’s little surprise that she got the biggest applause of the night and a standing ovation.

One audience member was overheard saying “she brought me to tears.”

Katzarava’s performance makes the audience wonder if maybe Puccini’s original intention was to make the character of Liù have more of a pivotal role in the conclusion of the story, a conclusion that has left many unhappy throughout the years, since it was written after Puccini’s death by Francoi Alfaro in 1924. 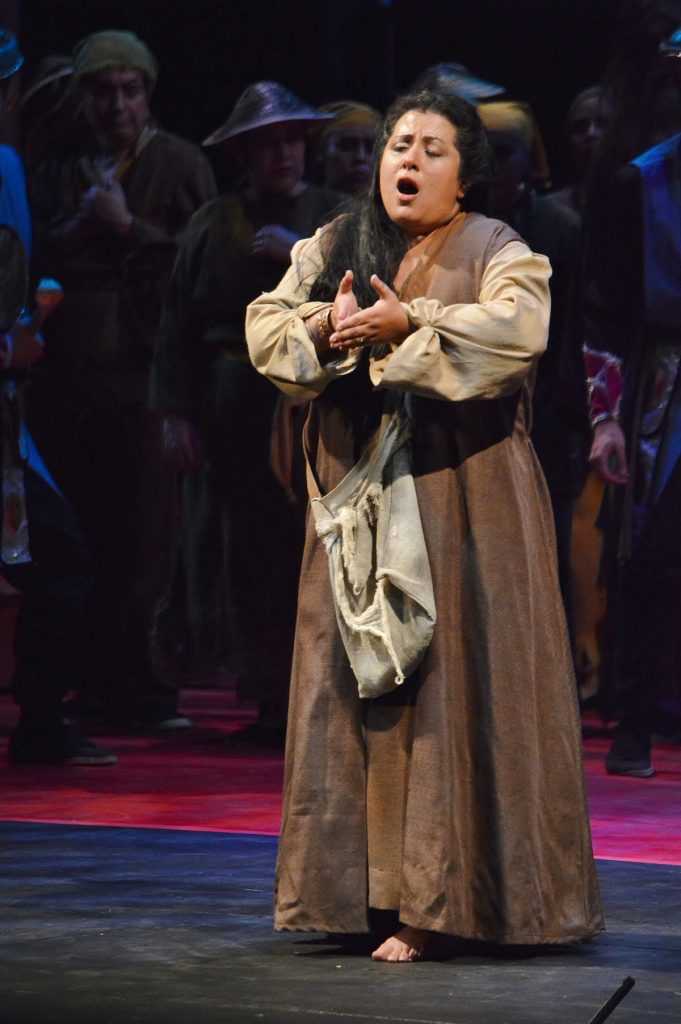 Soprano María Katzarava as Liù while performing in the opera “Turandot” at the Bellas Artes theater in Mexico City, Mexico, May 28, 2017. Photo: Courtesy of the National Fine Arts Institute

Not to spoil the plot, but it wouldn’t be difficult for someone unfamiliar with the story of Puccini and “Turandot,” to identify the part where Puccini left the work. There’s a sense that the character of Liú is heading on a collision course with Calaf, but the actual ending doesn’t seem to do Liú’s character justice and seems to ignore the importance of her character in order to allow for a rather odd love story between Calaf and Turandot.

It’s no surprise that when Arturo Toscanini conducted the premier of “Turandot” at La Scala, in Milan in 1928, he stopped the performance when he reached Puccini’s last work on the score.

Another great triumph of this performance of “Turandot,” comes from the visual aspect. The costumes and sets are exquisitely designed, managing to attract the eye without distracting from the story, a triumph by set and costume designer David Antón.

If there is one aspect that one might reproach, it would be that the acoustics at the Bellas Artes theater are not great, and sometimes it was very difficult to hear some of the performers, the tenors in particular.

It might be a crime for opera purists, but there are a lot of instances where performances could benefit from microphones, and this is one of those performances, especially for arias like “Nessun Dorma,” which has great emotional depth that the performers are not always able to project in large theaters with just their voice.

Soprano Gabriela Georgieva as Turandot while performing in the opera “Turandot” at the Bellas Artes theater in Mexico City, Mexico, May 28, 2017. Photo: Courtesy of the National Fine Arts Institute

Regardless of sound, this is a great musical and visual experience for people of every age. You don’t have to be an “opera buff” in order to appreciate the quality of Puccini’s work. In the end, this is a melodrama, and let’s be honest, if there’s one thing Mexican audiences love, it’s drama.

This opera alongside many others in Mexico, is produced by the National Fine Arts Institute (INBA).

Unfortunately tickets have sold out for the three remaining dates, but rest assured that proven its success, it is very likely that this great opera will come back to Mexico City in the near future.

A Brief History of the Evolution of Undergarments