Nine Colorful Characters Who Made History in Estes Park

The little resort village of Estes Park has been attracting visitors for more than 150 years
By The News · 11 of August 2017 09:15:52
Estes Park in Colorado one of the world’s most beautiful locations, No available, photo: The News/Rich Grant

Estes Park, Colorado – Sitting at the edge of Colorado’s No. 1 attraction — Rocky Mountain National Park — the little resort village of Estes Park lies in one of the world’s most beautiful locations, and as such, it has been attracting visitors for more than 150 years. In addition to the millions of tourists who have passed through, here are some other colorful characters who made history in Estes Park. 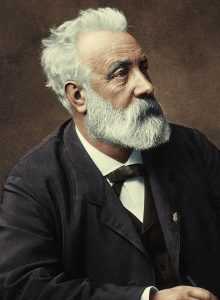 Jules Verne’s “From the Earth to the Moon” was set in Estes Park. Photo: Wikimedia

JULES VERNE
In 1865, nearly 20 years before his classic “Around the World in 80 Days,” Jules Verne wrote a science fiction novel “From the Earth to the Moon,” about the first spacecraft to the moon, which was fired from a gigantic cannon. To follow the space ship’s progress, he imagined a fictional 80-foot-long telescope on top of Estes Park’s most famous mountain, the 14,259-foot-high Longs Peak. This was somewhat remarkable, since at this point in history, no known person had ever climbed Longs Peak. Verne mistakenly thought this was the highest mountain in the United States. He wrote: “All the necessary apparatus was consequently sent on to the summit of Long’s Peak … Neither pen nor language can describe the difficulties of all kinds which the American engineers had to surmount … They had to raise enormous stones, massive pieces of wrought iron, heavy corner-clamps and huge portions of cylinder, with an object-glass weighing nearly 30,000 pounds, above the line of perpetual snow for more than 10,000 feet in height.” Quite an accomplishment in 1865, when in reality, there was only one family living at the base of Longs Peak — that of Joel Estes.

It’s not quite as big as Verne imagined it all those years ago, but the Estes Park Memorial Observatory’s Ritchey-Chretien telescope is your gateway into deep space. 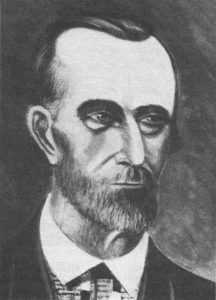 The park is named after Joel Estes. Photo: Estes Park

JOEL ESTES
Joel was a restless man. He and his wife Patsey raised 13 children. Joel crossed the Oregon Trail, went prospecting in California and ended up in Denver in 1859 as a cattle rancher. The Gold Rush crowds in Denver forced him farther and farther up into the hills, where he finally discovered an incredibly beautiful secret valley at the base of Longs Peak. When William Byers, the editor of the Rocky Mountain News, tried to climb Longs Peak, he stayed with the Estes family. Though unsuccessful, he rewarded the Estes’ hospitality by naming the valley “Estes Park.” By 1866, Joel was restless again and sold all of Estes Park for a pair of oxen and moved back to Missouri. But the memory of the place that still bears their name lingered on. Patsey later said her time there “was like living on the front doorstep of heaven.”

The Estes Park Museum provides a window into the town’s past, with artifacts and exhibits stretching back to Joel Estes’ time. 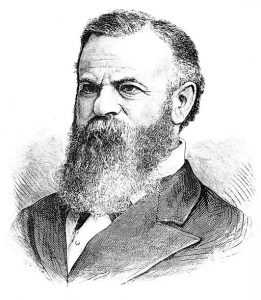 JOHN WESLEY POWELL
Even though he lost his right arm fighting for the Union at the Battle of Shiloh, John Wesley Powell became one of the most well-known explorers in history. In 1869, he led the first expedition to ever sail down the Grand Canyon in boats. A year earlier, he and William Byers made several attempts to climb Longs Peak, but were turned back each time. Finally, they found a route to the top and became the first white men known to reach the summit (though they found evidence that Native Americans had beaten them to the top). It is estimated that 200,000 people have climbed Longs Peak since then, about 7,500 a year — although 60 have died trying.

Get to the top of the iconic Longs Peak in a safe and responsible way with a guide from Estes Park Mountain Shop — 14,255 feet above sea level. 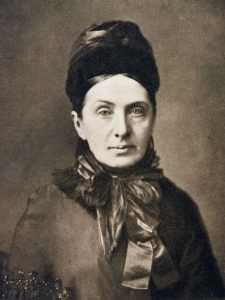 A frail Isabella Bird came to the Rockies to improve her health. Photo: Wikimedia

ISABELLA BIRD
The fourth woman in history to climb Longs Peak was destined to become one of the most famous travel writers of all time. Growing up in England, Isabella Bird was frail and suffered from nervous headaches and insomnia. Her doctors recommended an outdoor life, and, in 1873, she moved to Colorado, where the air was said to be good for your health. Settling in Estes Park, she eventually traveled 800 miles around the Rocky Mountains with her guide (some people said he was more than a guide), a one-eyed desperado named “Rocky Mountain Jim” Nugent (see below). Writing about him in her book, “A Lady’s Life in the Rocky Mountains,” she said he was a “man any woman might love but no sane woman would marry.” (In Victorian England, that line was censored.) Isabella went on to travel and write about all corners of the world and became the first woman to be elected Fellow of the Royal Geographical Society.

Isabella’s book about Colorado is still a great read and available in the national park gift shops and around town. Drop in to MacDonald’s Bookshop, Estes Park’s original bookstore, family owned since 1928, and browse their extensive history section.

“ROCKY MOUNTAIN JIM” NUGENT
Jim told so many tall tales that it’s difficult to separate truth from fiction. He may have been a trapper for the Hudson Bay Company, a British army officer or a defrocked priest. But we know for sure that he arrived in what would become Rocky Mountain National Park in the late 1860s. There, a close encounter with a bear left him with a scarred face and one less eye. Undeterred, he became one of the first guides in Estes Park and helped Isabella Bird and many others climb Longs Peak. But he had a falling out with another rival guide, Griff Evans. A year after Isabella returned to England, Evans shot “Rocky Mountain Jim” in cold blood with a double barrel shotgun. Incredibly, Jim lived long enough to write a statement accusing Evans, but without witnesses, Evans never stood trial.

The Fall River Visitor Center offers a variety of ranger-led educational opportunities, as well as exhibits on wildlife survival — just so you don’t end up looking like “Rocky Mountain Jim.” 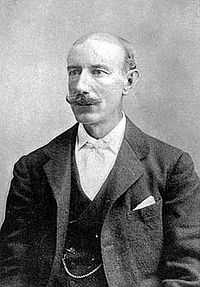 The Fourth Earl of Dunraven bought up land in the park using unscrupulous means. Photo: Wikipedia

LORD DUNRAVEN
A good friend and drinking buddy of the murderer Griff Evans was Windham Thomas Wyndham-Quin, the fourth Earl of Dunraven of Ireland. Lord Dunraven came to Estes Park on a hunting trip in 1872 and fell in love with it. In what has been called one of the greatest land thefts in Colorado history, Dunraven acquired (mostly through unscrupulous means) 15,000 acres of land around Estes Park to create his own private hunting reserve.
But the locals disliked his heavy-handed ways, and he became disenchanted with the large number of tourists visiting his private property (as many as 200 a summer). So eventually, Dunraven packed up and moved back to England, never returning.

Lord Dunraven came from Ireland — but the Dunraven Inn, the classic Estes Park restaurant that bares his name, specializes in Italian food. But certainly he’d approve of the Lord Dunraven, a center-cut sirloin steak charbroiled to perfection.

The natural beauty of the park inspired many of Albert Bierhadt’s paintings. The News photo/Rich Grant

ALBERT BIERSTADT
Before leaving, Lord Dunraven hired Albert Bierstadt, one of the most famous artists of the day, to create masterpieces of Estes Park. Dunraven paid him $15,000 — a deal in today’s terms. These days, Bierstadt is considered one of the great artists of the American West and his paintings, which hang in a dozen museums including the Smithsonian, can sell for $7 million or more. His paintings of Estes Park and the Rocky Mountains (now in the Denver Art Museum) helped popularize the area around the world. When Lord Dunraven decided to build a hotel, legend has it that artist Albert Bierstadt selected the site that would offer the best views and artistic light. That hotel burned down, but the next landlord would replace it.

Estes Park’s gorgeous sights continue to inspire, and the Art Center of Estes Park’s gallery brings together an array of masterpieces from local artists.

F.O. Stanley built one of the first automobiles. Photo: Wikimedia

FREELAN OSCAR (F.O.) STANLEY
In 1903, F.O. Stanley, the wealthy inventor and producer of one of the first automobiles, the Stanley Steamer, was stricken with tuberculosis. Seeking a cure, he did what many did at the time and sought out the fresh air of Estes Park. In one season, his health improved dramatically and he resolved to turn the area into a world-class summer resort. He purchased 160 acres from Lord Dunraven and in 1907 constructed a grand hotel in the Colonial Revival style of New England, complete with electric lights, telephones and en suite bathrooms. It was the first resort in the world where guests arrived by car rather than by train. Stanley helped Estes Park grow into a real resort village, and with his friend, naturalist Enos Mills, worked tirelessly to create Rocky Mountain National Park, which opened in 1915. The Stanley Hotel offered every modern service, except heat — a factor that helped determine its future fame.

Take a step back in time and learn more about The Stanley Hotel’s rich history during a daily guided tour that takes you all over the property. 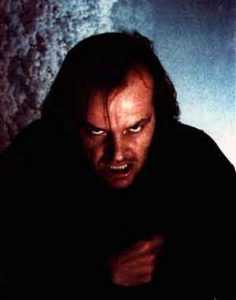 The Stanley Hotel was the inspiration for Stephen King’s blockbuster book and film “The Shining.” Photo: Interegalacticrobot

STEPHEN KING
In late fall 1974, a fledgling writer named Stephen King wanted to cross Trail Ridge Road, but it was already closed due to snow. He sought refuge in the Stanley Hotel. At this time, lacking heat, the Stanley was in the process of closing for the winter and King was the only guest. He sat up late with Grady, the one remaining bartender, walked the empty corridors of the hotel, and finally checked into room 217 … where he had one of the worst nightmares of his life. But by morning, he also had the outline of “The Shining,” his first best-selling hardback book. Both Grady and room 217 make important appearances in the book. The Stanley Kubrick/Jack Nicholson film of “The Shining” was shot in Oregon, but King disliked it so much, he supported a 1997 television movie remake, filmed entirely on site at the Stanley Hotel. Today, the Stanley is regarded as one of the most haunted hotels in the world and is studied by paranormal experts. Ghost Tours of the hotel are a popular excursion in Estes Park, and the film “The Shining” plays on cable in every room in the Stanley, 24/7. But don’t watch it there alone.

Want to discover the Stanley’s “spiritual” side? Night Ghost Tours at the hotel take you to a few darkened spaces, telling the tales behind the “active” phenomena and spirit folklore that have been causing bumps in the night for decades.

Most Notable LGBT Characters in Comics

Despite calls to start over, US health system covers 90%