A new food delivery app is available in Mexico City
By The News · 02 of May 2016 07:45:03
Rappitenderos, at your service, No available, photos: Courtesy of Rappi

MEXICO CITY — Rappi, Mexico City’s new food (and other products delivery app), is looking to give you time.

“What we’re giving our users is happiness,” Camilo Farelo, Rappi’s director of brands told The News.

In March, Mexico City residents experienced a stretch of days of pollution that made moving around the city inadvisable. Nearly every day, traffic clogs main thoroughfares. Even if you’re not driving, public transportation, though fast and relatively reliable, can be crushingly crowded during rush hour.

This means that running errands can be complicated.

This is part of the reason why Mexico City musician and sound technician Adrian López was so thrilled when he came across the app a few weeks ago.

“I use it about three times a week on average,” he told The News. “I like it because the service lets you quickly access almost any product and order it to your house at reasonable prices and delivery times.”

López says he mainly uses Rappi to order alcohol after midnight — when many of his neighborhood’s convenience stores stop selling it — and for “food that you can’t normally order to your house.”

He says he knows that the app isn’t entirely new — there are plenty of delivery services in DF, from Sindelantal to Zifty. But none have quite the same, fun interface as Rappi.

“I’ve never even tried the other ones,” he said. “Rappi is just that good.” 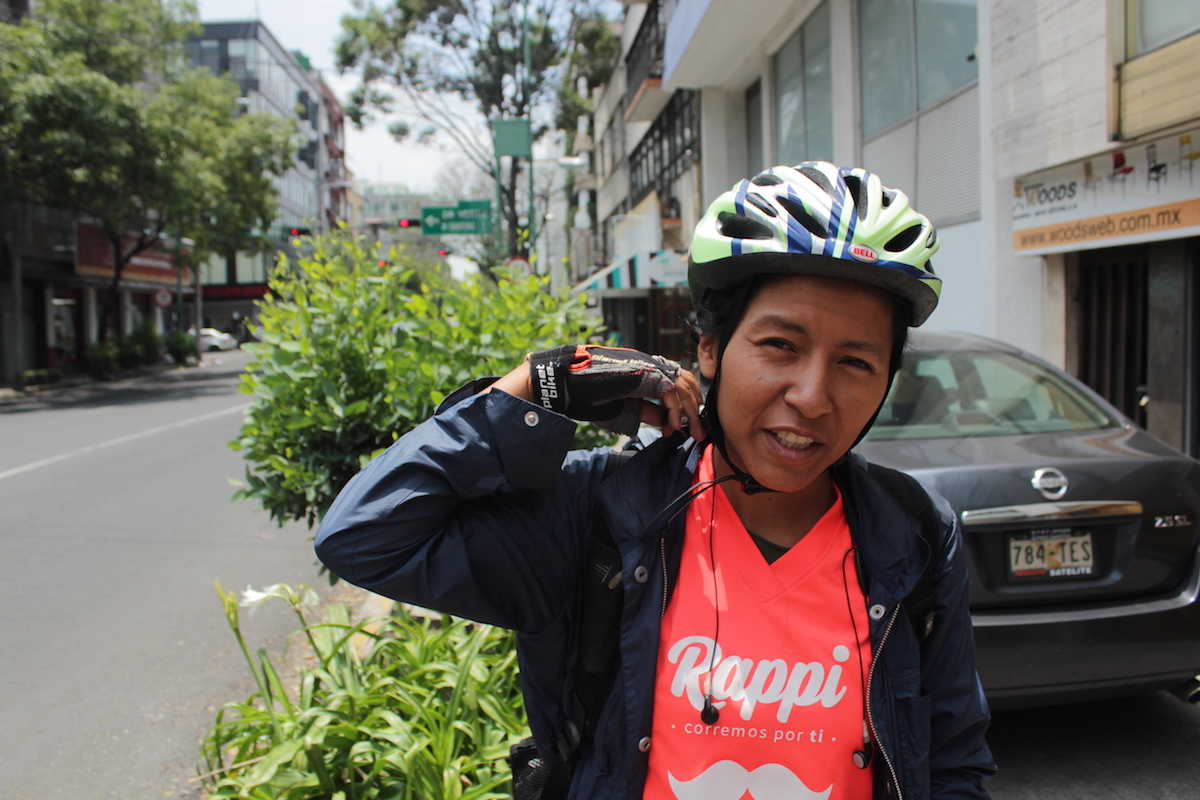 Mitzi Rodríguez has been a Rappi delivery person (a “Rappitendero”) for two months. She brings Roma and Condesa residents groceries to their homes 36 hours a week. Photo: The News/Caitlin Donohue

Rappi is not a Mexican invention. The addictive “drag and drop” interface was created by a U.S. company in 2013. Using that technology (its called Grability), Rappi launched its first app in Bogotá, where Farelo said a culture of staying in is pretty prevalent.

Rappi Colombia launched in June of 2015, with Rappi Mexico following in its footsteps at the end of 2016.

The capitals are both large Latin American cities in the mountains, but in terms of food delivery audience, their resemblance ends there. The brands and products the apps work with differ completely. Even the schedule is different — breakfast is eaten around 7 a.m. in Colombia, Farelo says. Here in Mexico City, many people grab their morning meal around 10 a.m.

Or they order it from Mitzy Rodríguez, one of Rappi Mexico’s thousands of Rappitenderos, as the company has dubbed its delivery people.

Rappitenderos are not considered Rappi employees, but rather contract workers — a common practice in the “sharing economy,” as companies that rely on renting or borrowing goods and labor like Uber and Airbnb are grouped.

Rodríguez is a student completing her thesis for her bachelor’s degree and training in martial arts. She likes riding her bike around the city, has a flexible schedule and was looking for extra work when she came across Rappi’s job listing.

“It seemed like an excellent opportunity,” Rodríguez told The News outside of Rappi’s offices in the Roma Norte neighborhood. She said during an average five-hour shift, she makes around 200 pesos ($11.61 U.S. dollars).

I’ve never even tried the other ones,” he said. “Rappi is just that good.”

“It can be hard getting around because the motorists don’t really respect anyone who doesn’t have a car, but if you ride with fear it’s more dangerous.”

Now, she rides around the Roma Norte, Roma Sur and Condesa neighborhoods, occasionally further afield if user demand there is high.

And it has the potential to be — Farelo estimated that Rappi Mexico has 35,000 users, many of whom are using the app, he said, three to four times a day.

Ordering with Rappi is addictive, he said. “The third time you use the app, you fall in love.”

Though Farelo said he could not divulge the app’s exact statistics, he said that many users are repeat users of the service. They need a meal — Rappi. They need a soda — another Rappi. There is even a service called Rappi Favor that allows you to send an item with a Rappitendero, like a house key your girlfriend forgot when she went to work or a contract that needs to get signed today.

Rodríguez says she enjoys working for the company. Her pet peeve? People who order something they could have gotten from the OXXO convenience store on the corner.

And that’s speaking as someone who regularly makes delivery trips for a single cup of coffee.

“I mean coffee, that’s more understandable,” she said. “You can’t get a cup of coffee just anywhere. People order from Starbucks, things like that.”

Rodríguez had no rack on her bike. Coffee cups have to go in the side pockets of her backpack, which she said is totally reliable.

“Everyone has their tricks,” she said.