NEW YORK – Villanova may not have played the perfect game but the Wildcats weren’t far off.

The second-ranked and top-seeded Wildcats shot 63.2 percent (36 for 57) and committed just five turnovers in a record-setting 108-67 victory Thursday over St. John’s in the Big East Tournament quarterfinals.

Villanova shot better than 50 percent from 3-point range (15 for 29), made 21 of 25 free throws and only committed seven personal fouls, none in the first half.

It was the most points and largest margin of victory in the tournament for Villanova and it was the worst loss the Red Storm ever endured.

“That was a pretty good effort for us defensively. It really was,” Villanova coach Jay Wright said. “And again that is maturity. It’s experience. … I think our guys had a great grasp of the scouting report and I think they played very intelligently.”

Donte DiVincenzo had 25 points and Kris Jenkins added 24 for the Wildcats, who had six players score in double figures.

DiVincenzo, a redshirt freshman who finished 7 of 8 from the field, including 5 of 6 on 3s, surpassed his previous career high of 20 points, also set against St. John’s.

“Going into the game I was confident as in every game,” DiVincenzo said. “But the only thing I can say about the 25 is it’s all because of the seniors and Jalen (Brunson) and E (Eric Paschal). Everybody was making the right play and I found myself open and today I was knocking down shots.”

The Wildcats (29-3) will face Seton Hall in the semifinals on Friday at Madison Square Garden. They met last year in the championship game won by Seton Hall.

The Wildcats took command from the start and led 52-26 at halftime. 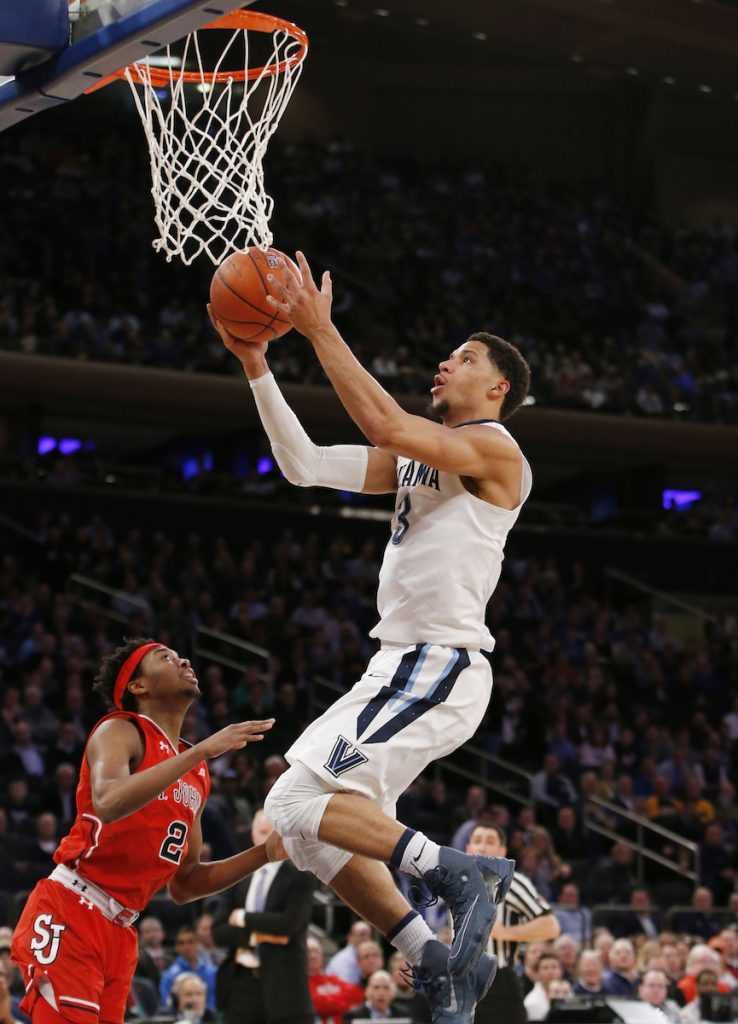 St. John’s guard Shamorie Ponds (2) watches as Villanova guard Josh Hart (3) goes up for a layup during the first half an NCAA college basketball game in the quarterfinals of the Big East Conference tournament at Madison Square Garden, Thursday, March 9, 2017, in New York. Photo: AP/Kathy Willens

Villanova shot 51.5 percent (17 of 33) in the first half, including 9 of 20 from 3-point range. The Wildcats committed just three turnovers, held St. John’s scoreless for a 6-minute stretch and outrebounded the Red Storm 21-13. Jenkins hit a long 3 at the halftime buzzer after a Villanova timeout with 3.3 seconds to play.

Bashir Ahmed and Marcus LoVett both scored 12 points for the eighth-seeded Red Storm (14-19), who beat Georgetown 74-73 in the opening round to snap a six-year losing streak in the Big East Tournament. St. John’s had twice lost by 29 points in the tournament.

“Villanova is one of the best teams in the country. So give all credit to them. And we welcome that,” St. John’s coach Chris Mullin said. “That was a good position to be in, to be able to play in today’s game. So no regrets.”

Mullin was asked about Villanova not having a foul in the first half.

“It’s pretty good defense,” he said with a smirk.

St. John’s: The Red Storm again followed the pattern of struggling early from 3-point range. They were 2 of 8 from beyond the arc in the first half. … Darien Williams was called for a Flagrant 1 foul against Darryl Reynolds in the first half.

Villanova: Mikal Bridges started for the Wildcats but played just one minute because of a stomach virus. … Villanova swept the season series with St. John’s by an average of 18 points. … Villanova’s previous high for points was 96 in a double-overtime win over Pittsburgh in 1998 and the previous margin of victory was 35 against Marquette in 2015. … Villanova improved its shooting in the second half to 79.2 percent (19 of 24), including 6 of 9 from 3-point range.

The 41-point margin of victory tied the Big East Tournament record set by Syracuse in a 96-55 win over Boston College in 1999.