During the opening ceremony of the 7th edition of the International Image Festival (FINI), Oliviero Toscani stood out from every other person in the room. The 75-year-old Italian photographer was the unofficial guest of honor during the first day of activities, and leading to the opening of his exhibit “Human Race,” which in its majority is mostly a collection of close-up images of faces set against a white background. 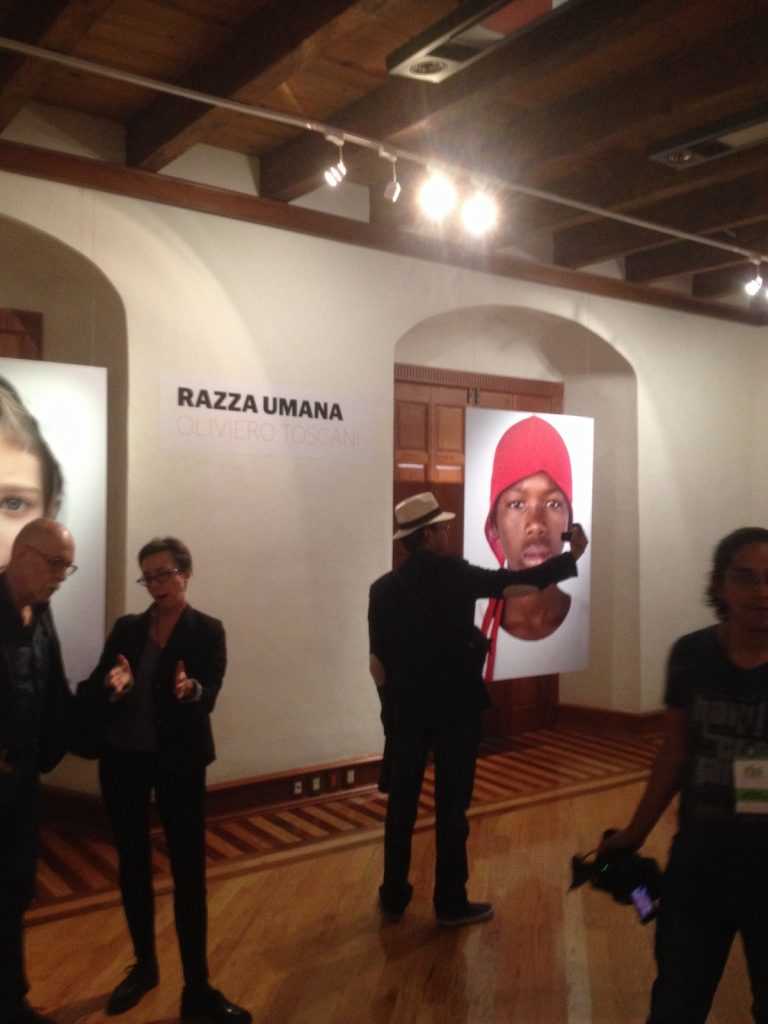 Members of the press and attendees walk around Oliviero Toscani’s exhibit “Razza Umana”(Human Race) during the opening day of the international Image Festival (FINI) in Real del Monte, Hidalgo, April 28, 2017. Photo: The News

The News was able to get some one-on-one time with Maestro Toscani.

In the exhibit currently in Casa Grande, in Real del Monte Hidalgo, amongst UAEH officials, students and media outlets, Toscani alluded to the current definition of an “artist” or a “photographer” by asking the audience “Who here hasn’t taken a photograph in their lives?” After a few seconds of nobody’s hand going up in the air, Toscani followed with, “There you go, you’re all photographers,” drawing laughter from the audience.

“Everyone can take a photograph, cameras today are better than any photographer, but it’s the eye of the photographer that powers the image,” said Toscani. 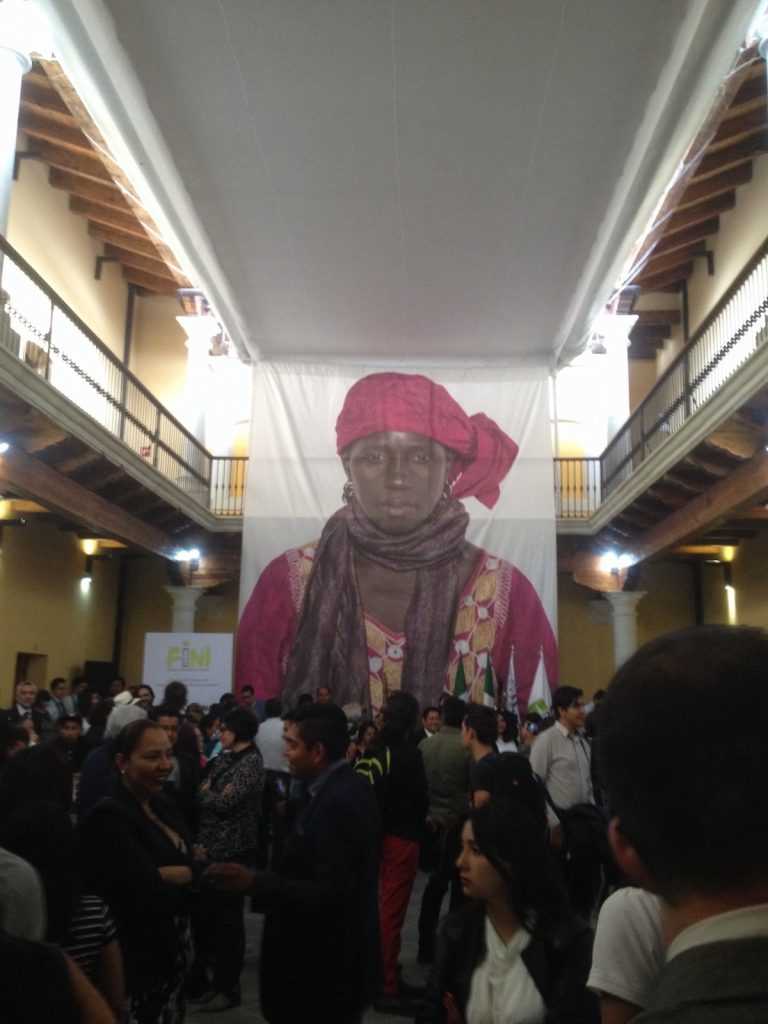 An image hangs in the patio of Casa Grande, in Real del Monte Hidalgo during the opening of Oliviero Toscani’s exhibit, April 28, 2017. Photo: The News

Toscani’s work should be familiar to anybody that walked into a store of Italian fashion brand United Colors of Benetton during the 90s. Toscani’s institutional campaigns for this brand defied many racial, sexual and social stereotypes with images that were far from shy, and considered by many as inappropriate to advertise fashion.

Toscani worked with Benetton from 1982 to 2000, where he founded the magazine under the name “Colors,” of which he remains a contributor.

During his opening remarks, Toscani highlighted the distinct look that faces in Mexico have, by calling it a “beautiful tragedy,” this referring to the fact that no matter how many problems Mexico faces, we still find a way to smile. 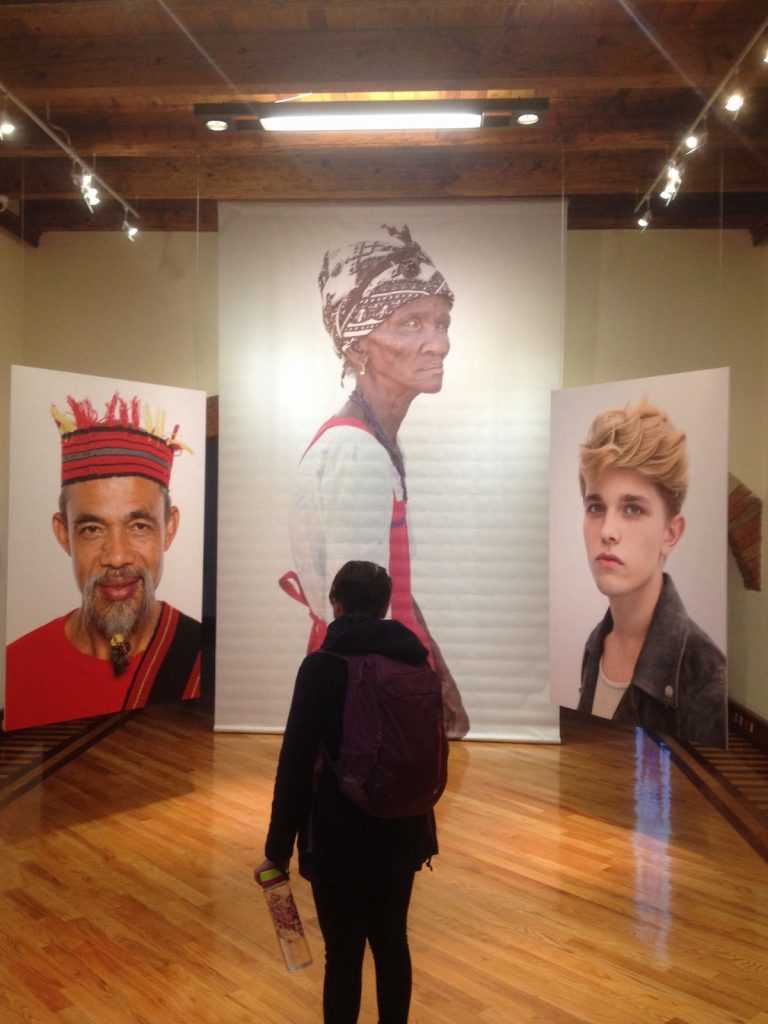 A UAEH student looks at images by Oliviero Toscani, during his exhibit “Human Race” in Casa Grande in Real del Monte, Hidalgo, April 28, 2017. Photo: The News

“It will probably be a long and troubled road, but I’m an optimist! I think that one day we will all become one humanity,” said Toscani.

After touring the exhibit, Toscani took time to interact with attendees and even take selfies with UAEH students, showing his comical side by going along with a girl who requested he pretended to bite into a lollipop for a selfie. Afterwards, he was rewarded with the lollipop. 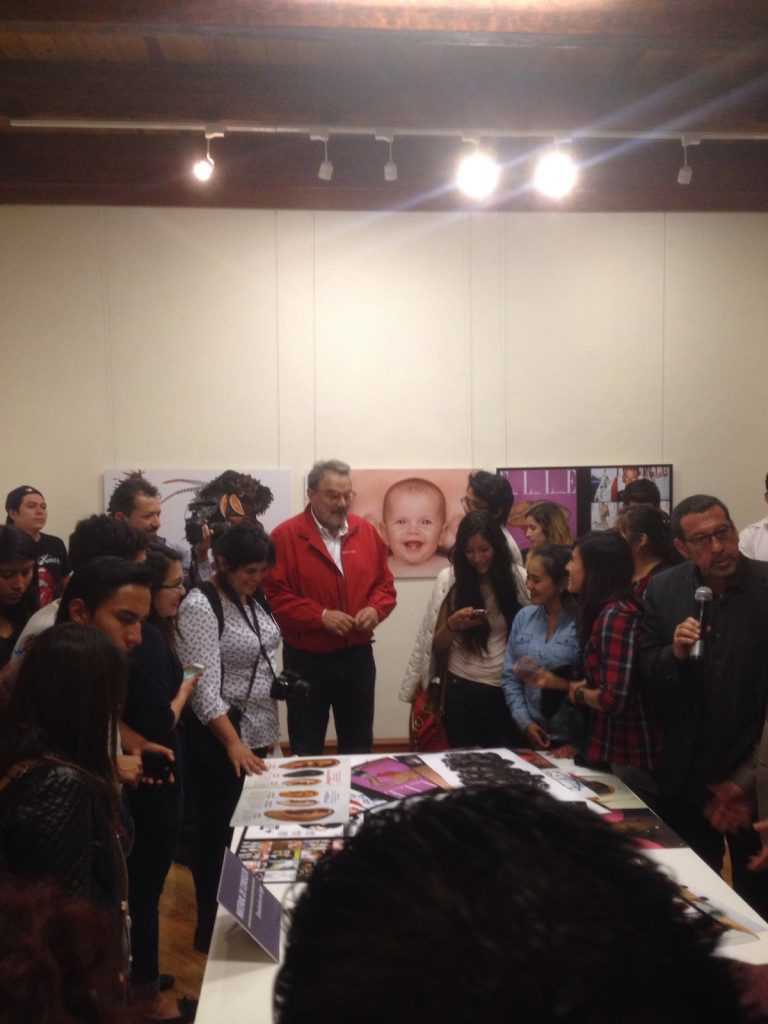 Oliviero Toscani, (C), interacts with students during the opening of his exhibit “Human Race” in Casa Grande in Real del Monte Hidalgo, April 28, 2017. Photo: The News

The exhibit which has been very well curated, is set throughout different rooms in the hacienda-type building. The images are printed in large scale, so that the viewer is confronted with the crude reality or beauty of the subjects, in whose eyes you can observe the reflection of the photographer.

One room holds Toscani’s most famous pieces, hanging on the walls and also a table littered with posters from different advertising campaigns and commercial work, which people can interact with. 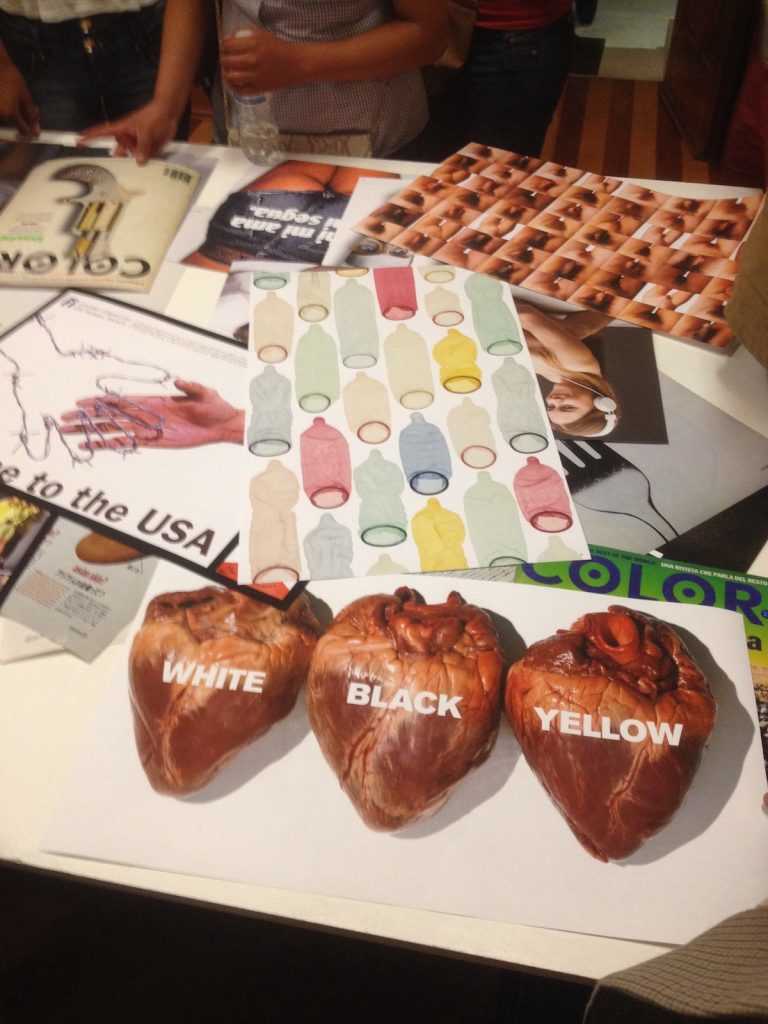 Table with some of Oliviero Toscani’s most famous work, including a picture at the bottom featuring three pig hearts, with the words “White, Black and Yellow” over each heart, in allusion to racism and equality, as part of Toscani’s exhibit in Casa Grande in Real del Monte, Hidalgo, April 28, 2017. Photo: The News 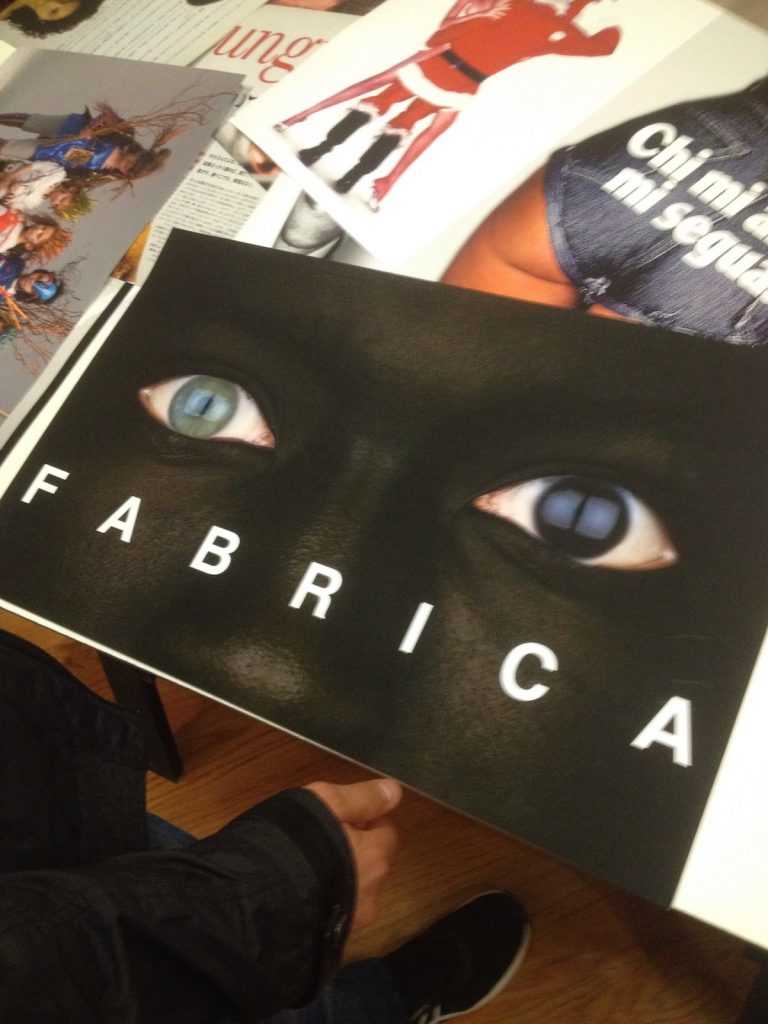 Toscani, who seems a bit awkward when walking about, changes into a completely confident man when talking about any subject, and when confronted with questions about his “controversial” campaigns, he simply replies: “I don’t care what others think”

Toscani like many Italians, loves arguments, and also respects those that can keep up with the discussion, or at least that’s the impression one gets after seeing Toscani answer questions from the media.

Blunt is one word that would describe Toscani’s responses, as one reporter from a prominent newspaper in Mexico quickly discovered when he tried to address the photographer as “Oliveiro” and Toscani frowned and quickly corrected “it’s Oliviero” pronouncing it slowly enough for the reporter to understand the gravity of his mistake.

When a reporter asked him if he considered that advertising had an artistic quality, Toscani responded by saying that he doesn’t care about advertising.

“I have worked in advertising, I respect advertising, but the process of creative directors has a lot of bullshit. I don’t work with bullshit, I only work with my team. We don’t have a dependence to the rules of marketing or to the system that advertising regularly uses. I do images that are used for mass communication. It is a very important tool of advertising”

It was after said incident and the consequential “bumpy interview” that The News had a chance to approach a notably tired Toscani with a few questions:

What was the first picture you took against a white background or the first time that you discovered this style?

How do you define creativity?

There is a poster up there (Toscani points to one of the rooms on the second floor). Go read it on the first floor. It was the manifesto that I wrote for Fabrica (a communications research center in Treviso Italy). 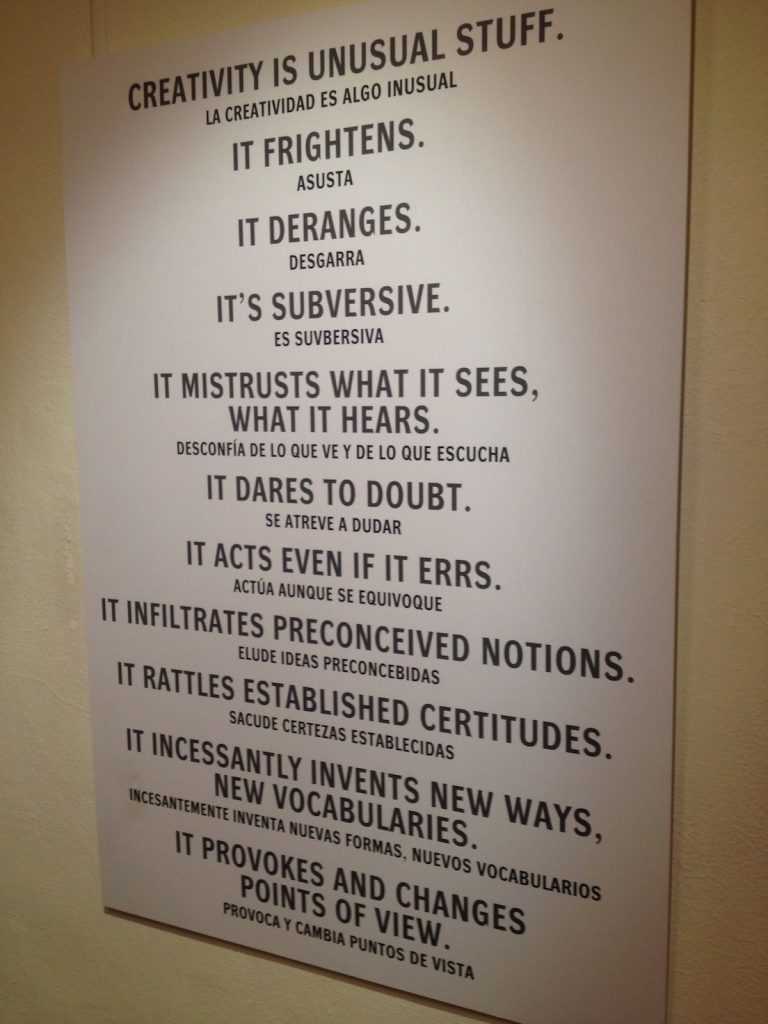 Toscani leaves the room moments after our questions, but the answer for Toscani’s view on creativity remains on the poster he mentioned.